The first time I heard The White Stripes’ Seven Nation Army, something clicked in my head. It was Spring in 2003, and I was already a fan of the band. Fell in Love With a Girl, with it’s Lego inspired video had already won me over, so I bought their previous album, White Blood Cells, or maybe downloaded it from one of the early pioneers of P2P software, but I don’t wan to remember that.

But then, Elephant dropped, and with it Seven Nation Army. The simplicity of it’s guitar riff (yes, guitar. It’s not bass) was just hypnotizing, the kind of riff that just gets stuck in your head and you can’t get it out even with a drill into your forehead. Yes, this song not only was great, but it was more than a song, it had something else. It was a meme, in the sense that was coined by evolutionary biologist Richard Dawkins in his 1976 book “The Selfish Gene”. An idea so powerful that spreads like a virus, person to person, even across different cultures, countries or even continents, becoming a mass phenomenon.

And that is exactly what happened on October 22, 2003, when Club Brugge fans visited San Siro for a Champions League match against AC Milan. According to legend, the visiting Belgian fans were pre-gaming at a bar near the stadium and the song started blasting. Fans were pumped, and left the bar singing and jumping to it, all the way to the game. Brugge won 0-1 and the song became a staple in the Belgian fans repertoire.

Three years went by, and on February 15, 2006, Brugge played Rome at home for a UEFA Cup fixture against AS Roma. The Italians went ahead in the score in the 44th minute, but when Javier Portillo scored the equalizer for the Flemish in the 61st, the stadium exploded to the tune. The Roman fans were blown away, and loved the song. So it was natural that when Perrotta scored the game winner, they started blasting the tune too.

And then they brought the chant back to Italy, where it was born, and ended up spreading to every stadium of Serie A. By the time the 2006 World Cup was around the corner, the tune was already being sang all over the country, even if a lot of the fans had no idea of it’s origin.

And then, it happened. The Azzurri went the distance, claiming the World Cup for themselves coming as underdogs, while the fans rocked the chant at every single game, and then at the celebrations, now changing the already classic “po po po po po po po” to “siamo campioni del mondo”, turning it into their own anthem. And from there, it just went to become a regular in the song collection of fans all over the globe.

Now days, the song is a staple in many different stadiums around the world. In Spain, Atlético de Madrid, U.D. Las Palmas, Sporting de Gijón and Real Madrid are known for their blasting the song after scoring a goal and in title celebrations, and in Serie A it is still the most popular chant all across the league. 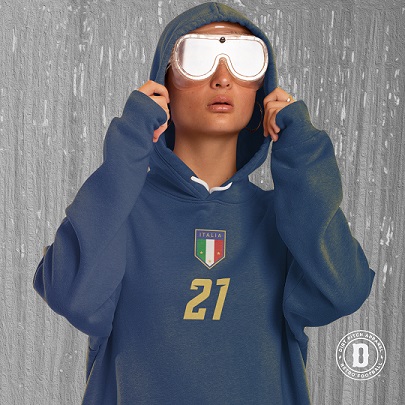 Although the lyrics are not really football related, the synchronicity must be strong on a song named Seven Nation Army, when a national team must beat the armies of seven different nations to be rewarded the cup. The song traveled a long way from America to Italy to Belgium, back to Italy, to Germany, before taking over all the footballing planet and entering the pantheon of sports folk. So, Jack and Megan White, thank you for that.