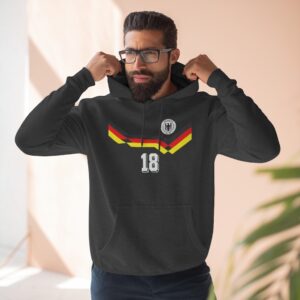 For both casual and hardcore football fans, each World Cup has the power to capture a special moment in time and engrave it in our memories. Not only on the sports side, but regarding a whole era, encapsulating culture and fashion and music, a perfect snapshot of a fleeting moment in history. And the 1990 Germany home jersey has the ability to bring back that nostalgia in every retro soccer fan.

Although the design made it’s debut in the 1988 Euro, where Germany lost to the Dutch champions in semifinals, the Germans made the unusual decision to keep the kit for the upcoming World Cup, at Franz Beckenbauer’s request according to the legend. A clean break from a long account of monochrome kits, the design created by the brilliant Ina Franzmann featured the black, red and yellow stripes of the German flag across the chest and sleeves, striking at both close and far. 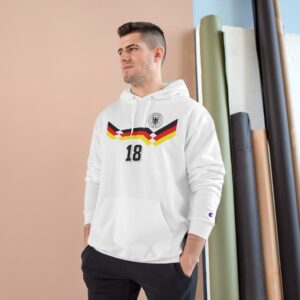 A design that good deserved a second shot. And the German national team delivered. After defeating resoundingly Yugoslavia and the United Arab Emirates (4-1 and 5-1 respectively), they met with the surprising Colombian squad, that managed to snatch a 1-1 tie from the future champs.

After that, the Mannschaft met their nemesis, the Netherlands, and the Germans were looking for revenge from the 88 Euros defeat. And they surely got it in San Siro, with a 2-1 victory with goals from Klinsmann and Brehme. That game is infamously remember for the image of Rijkaard spitting on Andreas Brehme. In quarterfinals, they met Czechoslovakia who put on a great fight, barely winning 1-0 with a penalty goal from Lothar Matthäus.

At semifinals, England awaited. After some solid performances, the English were sure that finally football was coming home. And the semis were indeed hard fought, with the Germans (playing in their away green kit this time) going ahead with Brehme’s goal in minute 60, but Lineker managed to score the equalizer in the 80th. Extra time went by with no changes, and then the penalty shootout came. What seemed like a nerve wrecking moment for both sides, became a show of German confidence. No German missed a penalty, and Pierce and Waddle failed to score.

And then, the final. Another revenge scenario, this time in front of Diego Maradona’s Argentina, who defeated them in the 1986 final 3-2 in a great display heart and football. The whole world was expecting for this game, and what we got, well… it was something. 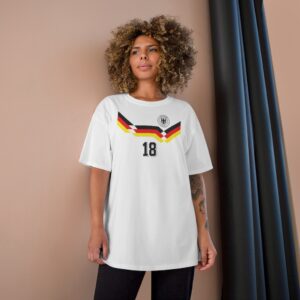 What was expected to be an attractive attacking match from both sides, ended up being a dull show. While the German team dominated their rivals (they ended with 23 shots and 16 scoring chances, against only one shot on goal for the Argentinian side) they weren’t able to turn that into goals, until a controversial penalty was awarded to them on the 85th minute. Andreas Brehme then faced Sergio Goycochea from the penalty spot, the great goalkeeper that had kept Argentina alive on previous rounds saving key penalties in shootouts against Yugoslavia and Italy in quarter and semifinals.

But this time, Sergio couldn’t stop Brehme’s solid crossed strike, although he was close. By then the die was already cast, and the Argentinans couldn’t react. Germany was the new World Cup Champion. And just like that, with the image of Lothar Matthäus lifting the cup, the 1990 jersey became a cult icon in soccer history.

Our 1990 Germany collection re-imagines that iconic jersey design in modern canvases. From t-shirts to sweatshirts to hoodies, including Champion Brand garments, we aim to bring back that retro look with a casual streetwear twist.